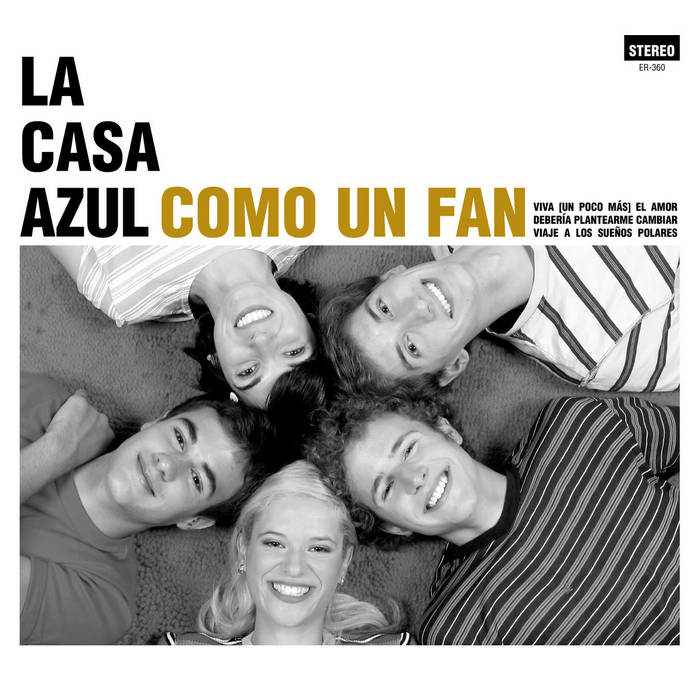 "Viva (un poco más) el amor" starts reminding of Brian Wilson's teenage symphonies, but it soon takes a different path with the typical frantic rhythm of LA CASA AZUL's best songs. "Debería plantearme cambiar" is more upbeat from the beginning, and takes us to the best moments of Motown soul, the old hits sung by THE SUPREMES or THE FOUR TOPS. In the bridge leading to the chorus they sound more than ever like the ELECTRIC LIGHT ORCHESTRA, nowe can really say that Guille has found "el secreto de Jeff Lynne" (the title of one of their songs). "Viaje a los sueños polares" is the uptempo cover version, in a nippon club-pop style, that they did a few years ago for the tribute to FAMILY album. A fantastically energetic easy listening tune that seems directly out from the mind of Yasuharu Konishi (PIZZICATO FIVE). "Como un fan", last but not least (especially being the title to the record), is a classicly cut pop song, talking about love and despair with a lot of pop icon namedropping, from Barça (the uber popular soccer team in Barcelona) and THE CLASH to Billy Joel or BEN FOLDS FIVE.

To make it a completely satisfactory pop experience, we have included two of the band's videoclips, containing the true essence of the sunshine pop and bubblegum aesthetics and lifestyles that we love so much. With such music as the contained on this single, the world can be such a beautiful place to enjoy.