Yo También [Me Too] 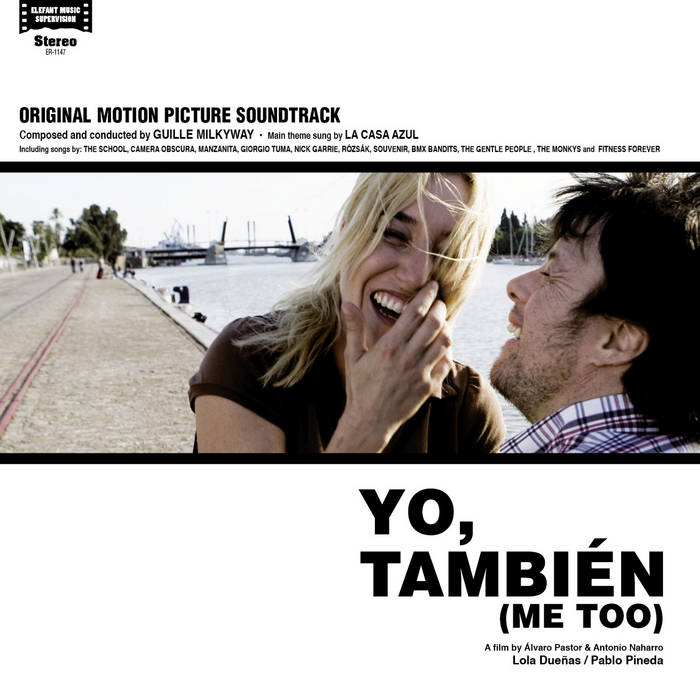 Clayton Giles I've never seen the movie, but the soundtrack is pretty good. There are a lot of short filler pieces, and some really good longer tracks. 32 tracks, 78 minutes. Favorite track: I Don't Believe In Love.

“Yo, También” [Me too] is the full length film debut of Álvaro Pastor and Antonio Naharro and it is one of the projects we have been involved in this past year with “Elefant Music Supervision”, a project that has been taking shape over time and that has the singular goal of helping and collaborating on audiovisual projects of all types, and to give musical supervision from Elefant that would help the creators’ find the perfect music for their work. Álvaro and Antonio’s recent visit to the San Sebastian Film Festival was a total success, two Silver Conches, for Best Actor for Pablo Pineda and for Best Actress for Lola Dueñas. Lola Dueñas (a renowned and prestigious actress, winner of a Goya for her role in Alejandro Amenábar’s movie “Mar Adentro” (The Sea Inside) and nominated for Pedro Almodóvar’s “Volver”), recently stated in an interview, “When I finish a movie, I forget about it, but I’d never experienced before putting on the music from the soundtrack, like this time”. The music plays such an important role in the movie and the musical selection turned out to be so varied and enriching. Guille Milkyway (LA CASA AZUL) was responsible for creating small musical brushstrokes especially for the movie. The soundtrack is atypical with simple, bare pieces, based on emotionally charged piano melodies that can just as easily express the greatest happiness as they can sink into the deepest sadness and frustration. Guille was also in charge of the movie’s theme song, a 70s style rumba, “Yo, También”, somewhere along the lines of the first recordings by LAS GRECAS or LOS AMAYA, but with that magical touch that our great master’s compositions are full of. There is a lot of music in the movie, as much music as there are characters and situations. Quiet moments, sweet, quotidian, romantic, sad, exciting, fun, crazy, partying, totally out of control… there is music to fit every moment and all together it makes a perfect soundtrack for understanding the movie. Guille’s rumba and MANZANITA’s “Te amaré” give that Spanish touch to the movie, which takes place mostly in Sevilla, but the soundtrack also has the delicate songs of Wales’ THE SCHOOL, the magnetism of CAMERA OBSCURA, the Italian romanticism of GIORGIO TUMA and FITNESS FOREVER, the delicacy of BMX BANDITS, the timeless folk-pop of Nick Garrie and RÓZSÄK and the strength and rhythm of LA CASA AZUL, SOUVENIR, BEEF, and THE GENTLE PEOPLE, among others.