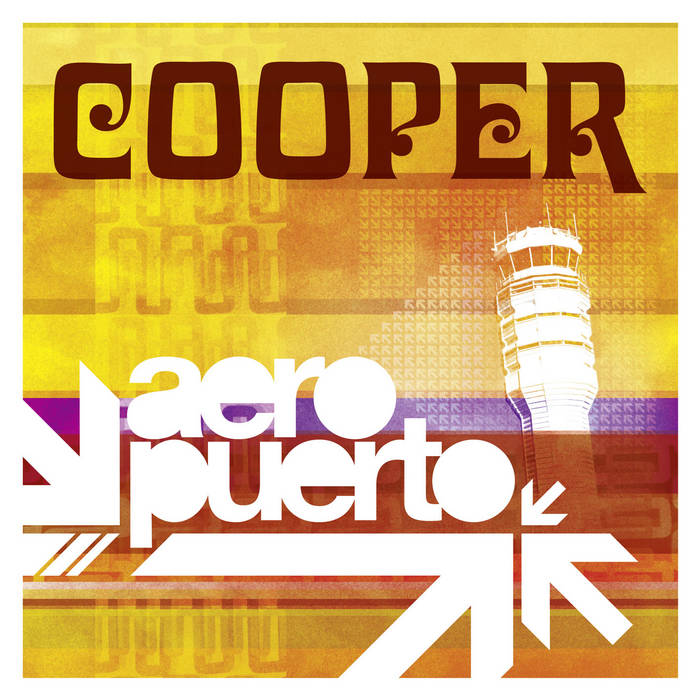 Alejandro Diez bet on carving out his musical career in singles (remember that manifesto called “10 Reasons to Never Release Another Album”?), and he’s winning that bet, in a way that deserves analyzing in these times of “the industry crisis”. When “Aeropuerto” is released (the third full-length in COOPER’s career), a compilation of many of the songs released on various singles put out since that “Retrovisor” that was born in a similar manner, what we really have before us are: first, a greatest hits, showing us the need for the artist to become the song, instead of the album itself. And this full-length does nothing if it doesn’t justify that full-lengths only make sense when each song has been worked with independently, as a work of art, self-sufficient instead of accompanying other songs. And second, this compilation (of course, with a handful of new songs and three video clips) works perfectly as a new point of inflection in COOPER’s career, a moment to look back (how appropriate was that last title!) and see the changes that have taken place over the years (among said changes, the change of bassist, Pablo Álvarez, and of drummer, Antonio Pérez, currently replaced by Daniel Montero and Nacho García, respectively), their evolution as a group, and think about how they are broadening their horizons, starting with these new songs. Actually, that’s just how Alex himself explains the disc: “I don’t think airports are transient places. For me, they are a starting point and a final destination. Origin and destination. Start and finish. The beginning of an adventure, that seems full of feelings and experiences still to discover, or the end of the road, that asks you to go over everything you’ve experienced since you started out. I like to think that this album is like that: a one-way ticket for those who don’t already know COOPER and also a photo album to look back over these last years for those who have traveled with us”.

If we pay attention to that last part, we can easily come to the conclusion that we are looking at an Alejandro Diez who is in a period of self-affirmation, of self-recognition, and at the same time, fully musical: he’s still got that perfect aim that he had with FLECHAZOS (“El Círculo Polar”, “Ruido”, “Mi Diario”, “El Sur”), the power-pop energy and the harmonies of his adored TEENAGE FANCLUB (“Un Día de Furia”), but he’s also got more and more classic flavor, close to bands like THE BYRDS or Neil Young (“Canción de Viernes”), with that unmistakable touch of personality that is the living history of Spanish music, and, above all, he’s got the freedom of a songwriter who doesn’t have to prove anything to anyone, and who can allow himself unusual and marvelous landmarks like that psychedelic and beautiful “Lisboa” (one of the new songs) or the languid and pristine pop of “En El Sofa”.

On the other hand, if we pay attention to the first part, we’ll see an impeccable collection of pop songs that is agile and addictive to listen to, a work that transcends the concept (and thank God, because so much conceptualism is drowning out the music and melodies lately) and lets us reflect exactly what it is in its essence: pop. Perfect melodies, precious harmonies, overwhelming riffs, boundless energy, without any pretension, and at the same time at the limit. In this aspect, the new songs work together in an important way: “Hyde Park” can be the most direct and uncontestable hit that Alejandoro has written since COOPER began; the choruses get into our subconscious (get ready to wake up whistling it every morning) as easily as it gets into our hips (soon to be played in all the bars). “El Sueño” is a marvelous version of NACHA POP only released as a single, just after releasing that unrepeatable debut alum – an incomparable homage to another of the bands that made pop great in this country. And ”La Edad de La Inocencia”, a new cinephile reference - very present in this album (“Un Dia de Furia”, “Rainman”) and on their album covers (on which Catherine Denueve has appeared on more than occasion) – in this case to the Martin Scorsese movie (one of their favorite film-makers) with Daniel Day-Lewis, Winona Ryder and Michelle Pfeiffer, on which Alex shows us his unbeatable ability to write memorable choruses.

Definitively, this album will satisfy completists and newbies alike, the summary of the last five years of an artist who is accustomed to making his own path – something he does with equal parts pride and generosity, equally professional and inspired, engaged (with pop and, by extension, with the music itself) and gratefulness. Buckle your seatbelts - the trip is only beginning.