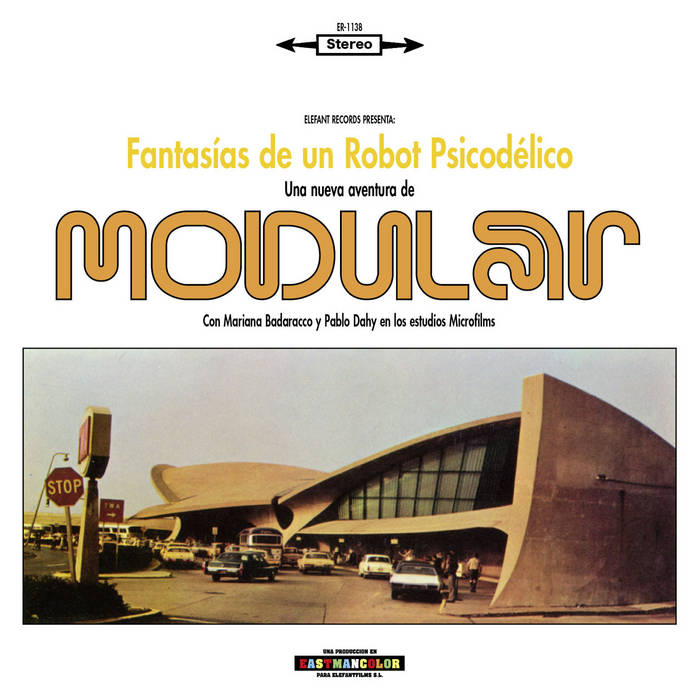 Space-pop and psychedelia? Ed Wood and Burt Bacharach? LE MANS and STEREOLAB? Science-fiction and lounge music? Stories about robots and magnificent orchestral arrangements? George Gershwin analogical synthesizers? Where have you ever seen such a cocktail? “Fantasías de Un Robot Psicodélico”, the debut album from MODULAR, Argentine duo founded by Mariana Badaracco and Pablo Dahy in 2000, pulls all this together and much more, in an experiment that identifies them as one of the most peculiar bands in recent years. Fruit of recovering some of the songs included on the four demos they’ve released over their more than nine years of existence, “Fantasías de Un Robot Psicodélico” is an exercise in spatial and colorful pop that is bright and optimistic and is the worthy heir of the Space Age Bachelor Pad Music led by Mexico’s Juan García Esquivel in the late fifties. Songs like “Perdidos en El Espacio”, “Playa Biquini”, “Hombre Hormiga” or “Flasheando” show their knowledge of science-fiction, B-series, the sixties’ spatial, psychedelic esthetic, the sophistication and elegance of Henry Mancini, as well as their mastery of arrangements, the analogical playfulness of bands as far in time but as close in spirit as THE UNITED STATES OF AMERICA, THE HIGH LLAMAS or BROADCAST. They are the vertex of a personal and unique sound, addictive and simultaneously surprising and groundbreaking. And the thing is, we never imagined that a robot could have such incredible fantasies.